Change is in the air and the vivid autumn colors in particular declare that change is coming.  Introducing change into an organization can also lead to vivid results as well as potential failure.  Part of my doctoral work was to research how organizational culture impacted the adoption of innovation.  A survey was sent out to managers of American firms.  The findings of the survey were significant.

It looked at three things:

For our purposes innovation is anything new to the organization.  Organizational culture can be measured at three levels; however, in this case it is represented as the shared values of the organization.  A tool was used by Cameron & Quinn called the competing values framework to get respondents to assess the core values and culture of their organization.

Organizational culture can be represented by the following diagram.  Organizations do not neatly fit in to any one segment.  The survey results would score each organization in a segment so that a company could be 20% create, 31% collaborate, 29% compete and 20% control.  While an organization has many aspects to culture, there is generally a dominant culture.  If there was no dominant culture it was set-up as a middle culture for reporting purposes. 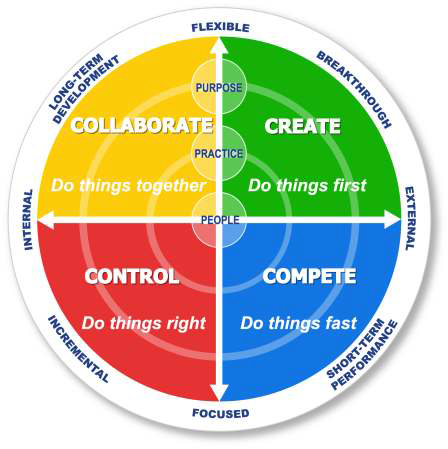 Collaborative and creative cultures, those that value flexibility over stability, were much more open to implementing an innovation.  The odds were 2:1 that a creative or collaborative culture would try an innovation.  There were similar odds that a control or a competitive culture would not consider implementing an innovation.  Of the 303 qualified responses only 199 organizations had attempted to implement a total of 446 innovations in the last three and half years.  Not all of those innovations were a success.  109 projects failed to meet their expected outcomes and 33 projects were cancelled before they were completed.

The real impetus for the research was to understand why projects fail.  There is large body of research on project management and IT implementation.  It leads to Cobb’s paradox which is: “We know why projects fail; we know how to prevent their failure – so why do they still fail?”  The thought was that organizational culture is an intervening factor in project success.  A logistic regression was done on one and two factors to determine that some management best practices did have a positive effect on the successful implementation of an innovation.  Typically the innovation includes the use of new technology, but it does not have to.  Management best practices coupled with a collaborative culture yielded the most positive results.  Both control and collaborative cultures, which have an interior focus, had a greater chance of success for implementing an innovation than a creative culture that would be originally more open to innovation in the first place.

Building on the cultural framework the thought was that innovations with expected outcomes that reflected the organization’s core values would have a greater chance of success.  The statistics did not support that idea.  It did support that culture alone was a significant factor of success.  It also indicated that some expected outcomes regardless of culture, in particular cost savings and improved revenues, had a greater chance of success.

What does all this mean for us?

Now when we visit a new client we do an informal cultural survey.  In one case we assessed the values of a new client as a control culture.  We were concerned for the initial buy in since the organization would attack the innovation like white blood cells would save the body from an infection.  Staff would need to buy into the project from the start for a better chance of success.

Cobb’s paradox still lives.  All the project management best practices can get derailed by culture.  The collaborative culture, where working together is valued, is the best organizational soil to plant and nurture the seeds of innovation.  Not all cultures are collaborative and neither should they be.  So project management needs to look beyond the budgets and GANTT charts and exercise organizational leadership.  This would entail ensuring that staff understood the expected outcomes of the project.  It also means that management needs to demonstrate how the innovation fits within the organizational values and the ultimate job to be done.  If the project doesn’t fit the organizational values or the job to be done there should be no shame in cancelling it before completion so resources could be allocated to another project that is more worthwhile.

A copy of the dissertation can be found here.   For more information or to engage in a discussion on the adoption of innovation feel free to contact Tom Kobelt.

About us and this blog

Learn more about us

At KDI we offer excellent customer service to clients all the while making their lives easier and simpler through the use of information technology.

You Don’t Have 90 Days to Get Your Online Store Going!

More from our blog

Set your IBM AS/400 data free! OR Rescue your IBM/400 data! OR…
Continue reading

B.C. is offering $7,500 to small businesses for online sales help

At the beginning of the pandemic, we wrote the following post: You…
Continue reading

Thinking about going remote-first, forever? Do these 5 things beforehand

During 2020, institutions of all kinds were forced to adapt to a…
Continue reading

As mentioned previously, Covid-19 has forced a change in the way we…
Continue reading
Prev. Post
All Posts
Next Post
No Comments